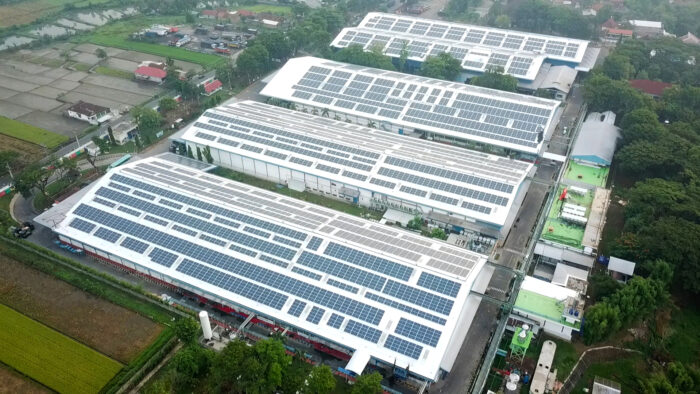 Singapore, 21 October 2020 – TotalEnergies DG has completed the biggest solar rooftop in Central Java, Indonesia, for the Danone-AQUA factory in Klaten. The project was inaugurated in October 2020 in the presence of the Government of Central Java, the Energy and Mineral Resources Central Java Office, and the Institute for Essential Services Reform.

Developed, built and operated by TotalEnergies DG, the rooftop solar system consists of around 8,340 solar panels, covering an area of 16,500 sqm. With a capacity of around 3,000 kilowatt peak (kWp), it can produce 4 gigawatt hours (GWh) of renewable electricity per year, allowing to avoid 3,340 tons of carbon emissions per year.

This project supports the clean energy development plans of the Central Java Government. Central Java is recognised as the first Solar Province in Indonesia, having committed to the central government’s renewable energy plan in September 2019.

Gavin Adda, CEO of TotalEnergies Distributed Generation Southeast Asia said, “Being part of a global leader in the energy sector, we are committed to providing cost-effective, clean energy solutions for governments, businesses, and stakeholders globally. We are proud to be supporting Central Java and Indonesia in their clean energy agenda, and to be trusted by Danone to support their carbon neutrality goals, implementing in our solutions the highest standards in tech and safety that will last decades.”

“Being an active partner of the government in implementing clean and renewable energy is one of our priorities and it is also in line with Danone’s global vision, One Planet One Health. To make this happen, we are committed to using up to 100% renewable electricity by 2030 at Danone operations around the world,” said Corine Tap, President Director of Danone Indonesia. “With the technology developed by TotalEnergies DG, our company now has a reliable solution to generate renewable electricity to power our factories in Java while also reducing our environmental footprint.”

In Indonesia, Danone has pioneered the use of solar power for its industrial sites across Java, including several sites in partnership with TotalEnergies DG:

3)    Danone-AQUA factory in Mekarsari, West Java (to be completed in 2021): Solar rooftops with a target renewable electricity production of 2.3 GWh per year, which will allow to avoid 1,670 tons of carbon emissions annually.

Danone has plans to have rooftop solar systems installed at its 17 factories across Indonesia by 2023 – for a total system capacity of over 15,000 kWp, producing 21 GWh of renewable electricity per year and avoiding up to 16,633 tons of carbon emissions per year.

TotalEnergies Distributed Generation (DG) is a wholly-owned subsidiary of TotalEnergies dedicated to the development of distributed solar energy solutions, including solar-powered rooftops and ground-mounted solar panels. Active in Asia since 2018, TotalEnergies DG is a major international provider of fully integrated solar solutions for the commercial and industrial sector, with a portfolio of over 600 MW of projects in operation and development in the region.

Danone-AQUA is the pioneer of bottled/packaged water and light beverage in Indonesia that was established in 1973. As an Indonesian-born brand, for more than 46 years Danone-AQUA has always tried to spread goodness to the community by providing healthy hydration while maintaining the sustainability of nature. This is in line with Danone’s vision, “One Planet One Health”, where we believe that public health is determined by a healthy lifestyle and environment. As the manifestation of a vision and commitment in the responsible running of an operation within a social and environmental structure, AQUA has developed the AQUA Lestari Initiative, which is comprised of Protection of Water Source, Reduction of C02, Package Optimization, Packaged Waste Collection, and Sustainable Product Distribution that have been executed by stakeholders and employees.

Danone-AQUA is a member of the DANONE Group, one of the biggest foods and beverage producers in the world. In Indonesia, DANONE’s business units cover two main categories, namely beverage and Specialized. Danone AQUA is the first FMCG company in Indonesia with B-Corp certification, which is the highest standard for social and environmental dynamics, transparency and accountability.

This press release, from which no legal consequences may be drawn, is for information purposes only. The entities in which TOTAL S.A. directly or indirectly owns investments are separate legal entities. TOTAL S.A. has no liability for their acts or omissions. In this document, the terms “TotalEnergies”, “TotalEnergies Group” and Group are sometimes used for convenience. Likewise, the words “we”, “us” and “our” may also be used to refer to subsidiaries in general or to those who work for them.

This document may contain forward-looking information and statements that are based on a number of economic data and assumptions made in a given economic, competitive and regulatory environment. They may prove to be inaccurate in the future and are subject to a number of risk factors. Neither TOTAL S.A. nor any of its subsidiaries assumes any obligation to update publicly any forward-looking information or statement, objectives or trends contained in this document whether as a result of new information, future events or otherwise.